I meet another Berzerker!

Earlier this month I took some vacation from work, hence why I haven't been posting updates. While I was away on my vacation I got the opportunity to meet one of the best Berzerker's in the world, Joel West! 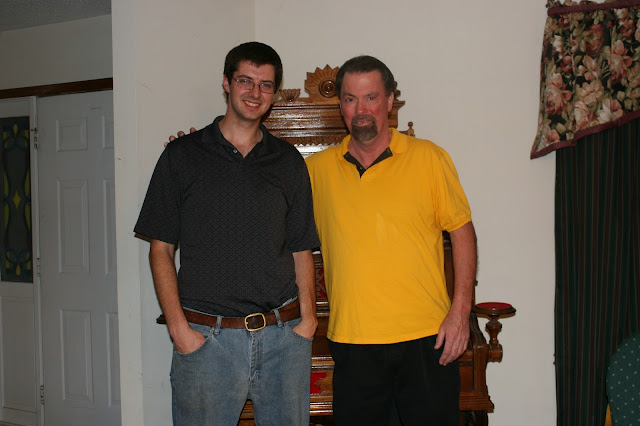 This a picture of me on the left and Joel on the right the day we meet at his home in North Carolina. Joel and I first chatted when he was streaming video of himself playing Berzerk on his twitch tv account, JoelWestGamer, back in February of this year. He was playing a couple of rounds of fast bullets Berzerk while chatting with the people in the chat room at the same time.

Since that first stream, I tried to watch and learn every time Joel streamed. Sometimes I was getting up very earlier in the morning to watch him play for just 40 minutes, but I never wanted to miss an opportunity to learn something about the game I love from someone who has been playing it for 30 years.

Though I am now focused on the first version of the game, RC28 slow bullets, at that time I was still playing fast bullets Berzerk.  I was able to significantly increase my RC31 fast bullets score from watching Joel play. After watching him stream one time, I was able to increase my personal best score in fast bullets from 11,540 points to 12,480 points, almost a 1,000 point increase. After watching a couple more streams, I was able to get a score 15,050 a few weeks later. Though none of these scores are "amazing", I was learning and improving, but more importantly I was having fun!

Joel did not say this with malice but to motivate me which he said about a minute later on his stream. Though it was funny on the stream, Joel was at that moment living one of his favorite sayings "Iron sharpens iron!' I needed that push, I had been stuck at the 42,880 for about a week at that point and I think it was a day or two later I got 51,540 points in Berzerk.

Since that game Joel and I have been pushing each other to keep playing better at our versions of Berzerk, RC 28 slow bullets for me and RC31 fast bullets for Joel. Whenever we watch each other stream, we even comment on weither or not we've played "respectable" games of Berzerk that night.

Back to my visit with Joel, oddly enough when I went to meet and visit with Joel, his machine was set to play Frenzy. Joel was playing on my Frenzy PCB actually which I had lent him a couple of weeks earlier when he couldn't get his Frenzy board working correctly. Why you might ask? Because playing Frenzy will drastically improve you Berzerk skills, regardless if its slow bullets or fast bullets. In Frenzy  you have to focus on some many more things going on around you that the game forces you to learn to observe your surrounds even more than you do in Berzerk.

I think we played a couple of rounds, never a 2 player game, Joel was just showing me all kinds of things he had learned about Frenzy over the years. The most impressive thing I saw Joel do while I was there was play Frenzy one handed and he still played way better than I am able too! During my short visit, we shared things we have learned about Berzerk and Frenzy. It was great being able to collaborate with another Berzerker who knew so much about game, and to share with Joel somethings about the game he hadn't seen or knew before.

Joel is great gamer, but more importantly a good friend that continues to push my gameplay in Berzerk. I look forward to learning and competing with Joel in the future. Maybe sometime later this year Joel and I will be able to play a 2 player game of slow bullets Berzerk on the same machine on a live stream. I'll do fast bullets and Frenzy at some point . . . once it would be a fair competition! Trust me when I say this, even with Joel only playing with one hand, regardless if its Joel's dominate playing hand or not, he he still out of league in those RC31 fast bullets and Frenzy! In Slow Bullets, I think I have a chance!
Posted by Disjaukifa at 1:31 PM