So I've got a SLEW of speech boards from when I was trying to get my first Berzerk machine to have working speech. I spent I think 6 weeks working on it. During that time I bought every single Berzerk VSU-1000 speech board I could get my hands on.

Well the problem turned out to be a wiring issue and not a board issue. Once I did that, I had 6 speech boards, turned out 4 were good and 2 were bad . . . or at least I thought two were bad.

Well I was going back over my stash of Berzerk stuff and decided to test the two dead boards again, one just does nothing, so yeah its dead. The other boots up and some strange noise comes through the speaker but this time I kind of recognize it. Same as last time. I just thought something on the board was bad.

Decided to play a game with it. The board is good, there is nothing wrong with it. Its just in GERMAN!!!!

I don't know if this is original, I can't remember WHERE I bought it from, but I dumped the roms with my Batronix BX32 programmer and did a rom compare with MAME to the German Berzerk set and sure enough it was a perfect match!!!!

So somehow I ended up with a German VSU-1000. Not sure how I managed that, but I really don't even know if its original or if someone before me put the german roms on it, but I think its just about the neatest thing in the world!!!

Decided to play with the German VSU-1000 tonight and on my second game I was able to achieve a score of 68,460 points, my 3rd highest score ever! Also it had the added benefit of knocking off my only score that was in the 50,000 off my high score list!

Had a great game tonight even though my stream cut off in the middle of my broadcast for some reason, never seen that happen before! It really freaked my out! I need to figure out why that happened. I'll post video of the german speaking Berzerk game soon!

Posted by Disjaukifa at 12:34 AM No comments:

Well after my 110,930 point game I stopped playing Berzerk for a while because of work and other stuff going on in my life. Finally I'm getting back into the swing of things, and I finally seem to have my Berzerk machine working again, been fighting some monitor issues that have been annoying.

I haven't gotten the board working yet, its got to be something minor, the thing looks brand new!

Also I got another interesting toy in the mail, this one from ebay! I got a Berzerk ZPU-1000 logic board that has been modified rather extensively to play Frenzy!!! I've not been able to find any information on this mod, and who originally developed it. 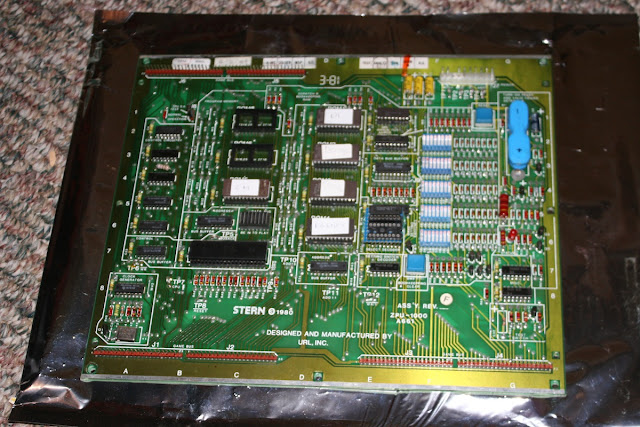 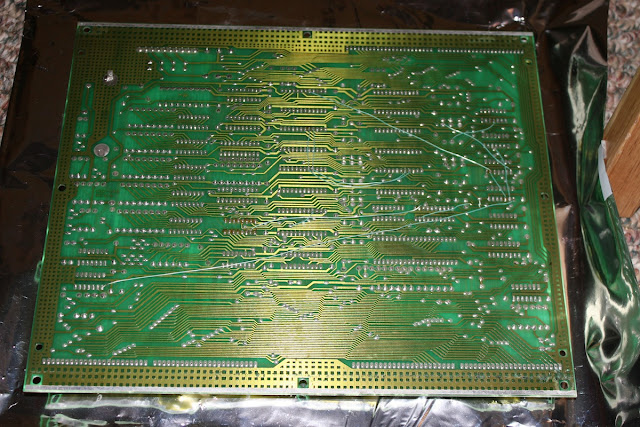 I've confirmed that it plays Frenzy and it works well, and I'm glad I got it! If you have any more information on this board please let me know!

Finally got around to playing some slow bullets again in the last week, I've had 3 games in the mid 40K range and last night I had a game that I believe ended right at 54K, not too bad. Still making some mistakes that I need to learn not to do, most importantly don't attempt the 2 o'clock angle shot . . . it only has about a 50% success rate and is my most common mistake I make.

Posted by Disjaukifa at 12:33 PM No comments:

I did it! It took just under 2 months of playing slow bullets Berzerk, but I was able to achieve a score OVER 100,000 points, I got 110,930 points in Berzerk RC28 slow bullets tonight! Here is the entire game from booting the machine till the very end when I stopped broadcasting!

Now for the interesting points about the game! The game lasted almost exactly 1 hour and 20 minutes. I went on my 4th man from 32,840 points to 105,840 points! Thats 73,000 points exactly! If I could have gone just 1,060 more points I would have gotten my previous high score on one man!

The game started out rough, I made two really horrible mistakes early on in the game and one point I even said "Ugh I'm not going to break my record on this run!" Wow how did I prove myself wrong.

This game was special to me for several reason. First my son woke up while I was playing and wanted to come say good night to me in the middle of the game. I even asked my wife if I should turn the game off but she said no, and you can hear him saying the various phrases the game says in the background.


Second my wife was able to be there with me when I broke 100,000 points, that is something I will always have to treasure for the rest of my life! When I broke 100,000 the first time, she was with me and that meant the world to me! 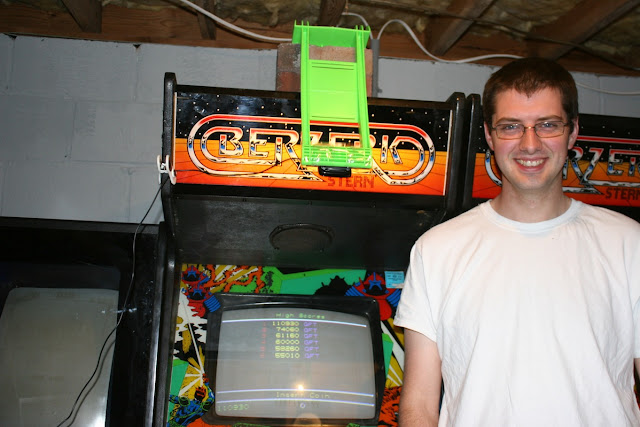 I was very happy with the ending of the game. I didn't die on a mistake, though going back and looking at the video I might have been able to escape the last maze I was in, to me it was an unbeatable room.

Now I have my sights set even higher! The current world record for Berzerk slow bullets done with random play, not the highest score ever, is 178,500 points! That is the score I want to beat! My next goal now is to get to 150,000 points with random play!

Decided to try my hand at making a highlight reel of my game play. Two days ago I played 3 games of Berzerk slow bullets. I was able to pull off some amazingly close calls and even escape death! Check it out!