I recently acquired a set of RC28 EPROMs of Berzerk. This was the original version of Berzerk. There are actually two version of Berzerk! RC28 and RC31. RC28 designates the "slow bullets" version of Berzerk where the robots will never fire back at you at the speed at which you fire at them. However the game has one major difference. At 5,000 points, Evil Otto doubles in speed and you can not get away from him once you have cleared all the robots in the maze. Also there are only 3 types of robots, yellow, red and cyan.

In RC31, fast bullets, Evil Otto's speed never increases, which makes it so you can always run away from him as long as you can keep going on the horizontal. Also on the RC31 version there are many more robot combination, the ones I hate the most the light cyan ones at 10,000 points! At 7,500 in the RC31 version you hit the fast bullets stage where the robots shot at the same speed that you shoot at them.

When I got my Berzerk machine in January of this year, it came with the RC31 roms which is the more common version of the game that everyone has played.

I've spent weeks looking for the slow bullets set and was finally able to find a set and here are my finds! My scores are easily higher than my fast bullets scores, easily. I've only played slow bullets today, but my high score is 20,200 and I'm getting to 15K+ every game. 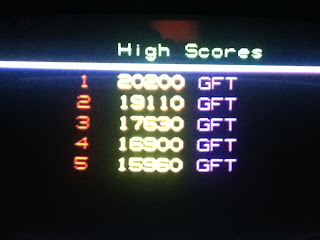 However I found RC28 slow bullets version of the game more terrifying. I dread Otto saying "Intruder Alert!" because I know I can't out run him. I'm having to selectively attack the robots on the screen where as before I just shot the robots immediately around me. I know if only 2 ~ 3 robots appear on the screen I don't have time to shot them, I have to run for closest exit with extreme haste.

Don't get me wrong I love the slow bullets version it's a fantastic version of the game, but I found it gives me more gripping gameplay, and because I'm worried about Otto appearing, I find I make really dumb mistakes when trying to clear the robots on the screen.

I remember reading they changed the game because people said it was too difficult and I found that difficult to believe, but having played both versions, I wouldn't say its more difficult, but I would say the game level of intensity is more gradual in the RC31 fast bullets version compared to the RC28 slow bullets version.

As to which one is my favorite, I don't know yet, I have a love for RC31 fast bullets as it was the first version I played, but there are aspects of RC28 slow bullets that are great as well. I wish there had been a third version that kind of meshed the two together, all the various color robots from RC31 but leave the bullet speed the same with the speed of Evil Otto in RC28!
Posted by Disjaukifa at 10:13 PM