I've decided to shift my focus for now to the original version of the game Berzerk which people have dubbed "RC28" as that was the ROM version label on the original ROMs on the ZPU-1000 logic board.

In a way there are 3 games in the Berzerk trilogy, or at least that is how I see it.

1st. Berzerk RC28 (Slow Bullets) <-- The original version of the game as it was intended. The robots are in a way are not your enemy but more your allie in a strange sense as you need them to be on the screen after 5,000 points to be able to escape Evil Otto.

2nd. Berzerk RC31 (Fast Bullets) <-- In a sense I now consider this a sequel. While the graphics, game play mechanics are virtually the same, I've played both versions enough to know they are really two different games. In a sense I consider RC31 Berzerk a sequel which is a great game but the mechanics are different enough that I consider it different. Evil Otto you never really have to worry about, he is more just there to keep the game moving and the robots are the real villains in the game now.

3rd. Frenzy <-- This one is interesting, in a way it is a true combination of the above games. You have the variety of the robots from the RC31 version of the game with the sense of being overwhelmed from RC28. Though I haven't played this game that much, its a fantastic game. 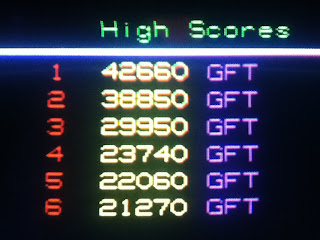